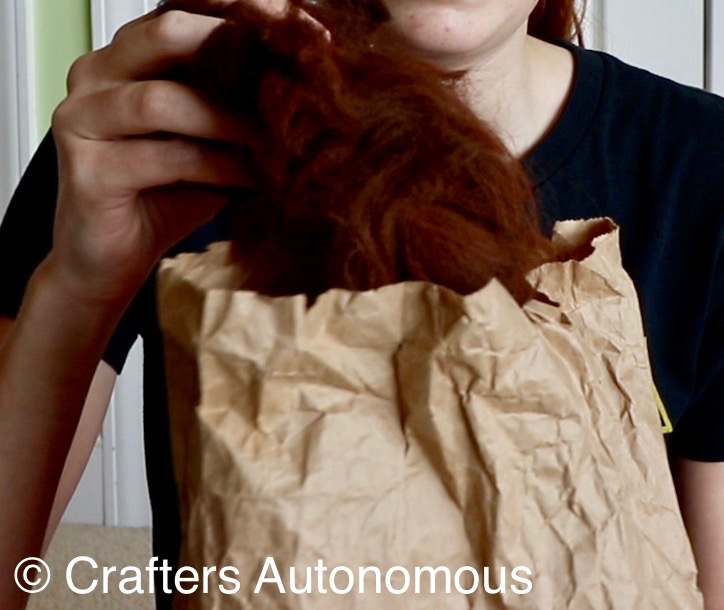 New yarn is one of the most exciting things to me. But recently, I started on an adventure to make my own yarn! Here’s how it started.

On a family vacation a while back, we visited Mount Vernon to see the farm running. Of course, the workers were all in character, dressed in clothing appropriate for the time period. What was my favorite part, you might wonder? The sheep.

Granted, sheep are not the brightest, cleanest, or nicest smelling animals out there, but their wool can be turned in to yarn! On the day we were there, they were shearing the sheep. It was a fascinating process that sparked a dream to one day own my own sheep, shear them, and, well, complete the entire process of going from sheep to yarn to a finished project.

Okay, yeah I know, very unpractical and unrealistic. But who knows, maybe a few years down the road… (okay let’s be real, this is more like a retirement hobby than something a full-time college student can manage.)

That was a few years ago, and for obvious logistical reasons that has not happened yet.  But something almost as good did.

While visiting friends, my dad struck up a conversation about how I’ve wanted to take raw fiber, spin it, and make something from it. You know, follow the process from start to end like they did in “ye olden days.” Coincidentally, the individual my dad was talking to had relatives who owned alpacas.

And guess what? They had just recently sheared the animals, and the alpaca fleece (often simply called alpaca; it’s both the animal and what you get from the animal. Confusing, right?) was sitting somewhere waiting to be sold or processed or whatever the individual’s relatives do with the alpaca.

So cool, weird connection. I got to see the alpacas too.  But then the trip was over and it was time to head home. We packed up our stuff, shoved it in the van, and headed off. Once we were on the road a little ways, my dad passed a brown paper lunch bag back to my seat. “Here, this is from [the individual]. He grabbed some from his relatives.”

When what to my wondering eyes did appear, but alpaca fleece! Soft, warm, clean alpaca! My dad then went on to explain he didn’t show me earlier, since the individual hadn’t exactly checked with his relatives who owned the alpacas if he could grab some for me, since they weren’t home and he wasn’t sure what they normally do with it; but he took just a little bit and thought it would be okay because it’s family. So yeah, I rode the rest of the way home freaking out about contraband alpaca. (You know, the more I think of it, the more this story might just be “how Amanda ended up with stolen alpaca fleece.” I’m not so sure of the morals this story might be teaching.)

So, as I rode along in the car for the rest of the day, I researched alpacas. I had plenty of time too, because my family vacations are never uneventful. (We’d already had two flat tires on the trip so far.)

See, the plan was to stop at a hotel in Virginia… except we forgot it was fall break weekend for many places, and dances and football games meant lots of people were traveling. Thus, we drove for three more hours during the “Great Hotel Shortage of 2016,” until we finally got a hotel around 2 am. So yeah, lots of time to research alpacas. 🙂

You might be interested to know what I learned the rest of the drive home in my research on processing alpaca, and, more importantly, how owning alpacas is even better than owning sheep.

I’ve had the fleece for some time now but have not done much with it because my previous attempts at spinning the fiber failed. However, I had a crazy idea on how to card the fleece.

Watch for a video to be posted soon!