I’m not typically a trendy person. Not because I think I’m “too good” for mainstream; and not because I always dislike the ideas either. But for whatever reason, I usually don’t jump on the bandwagon when something new comes out.

Except this time, I’m going to be trendy. 😉

I think there’s good reason to join the craze because LOOK AT THOSE EYES!!! So for those who haven’t seen this project before, it’s called a no fuss fish. Why? Because this adorable pet requires no maintenance. I only know of two no-maintenance pets: outdoor cats, and these no-fuss fish. And even outdoor cats require some love and attention (and food and water, of course 😉). But this little guy? Nope. Crochet this little fella’, make a home, and done.

One of the things I love about this pattern is how quick it works up. Despite years of practice, my crochet speed is slow to average. But once I nailed the pattern, I was able to work up this no-fuss fish in less than 20 minutes, including assembly.

This lil cutie has another perk: so many options for eyes! I chose to go with googly eyes for my fish. As I mention in the video, tacky glue will probably create the best hold. I know super glue supposedly never comes undone, but it doesn’t bond super well with the yarn. My first fish lost an eye I had super glued on, and that’s just not super. So if you glue on eyes, I recommend using a tacky glue that will grab the yarn better.

Another idea is to use safety eyes, like these:

I haven’t personally used these safety eyes, but reviews indicate they are a solid economy option. One advantage of the safety eyes is the ease to attach; there is no glueing and no sewing! I’ve also used my Snap-Kam pliers to make eyes, much like safety eyes. I use the button cap to create large, round eyes, and snap them into place with the pliers.

One last idea off the top of my head is to use buttons for eyes. Personally, I think button eyes look cute on amigurumi projects, but I don’t think they would look right on a fish. Plus, that would involve sewing, and who wants to mess with that? (Not me!)

One last tip for these fish that I don’t mention in the pattern tutorial video, is how to stuff them. If you watched the video, you saw my amazing blunder where I completely forgot to stuff my fish! 😳I had to frog the tail, but at least I noticed it before going much farther! Anyways, when I eventually did stuff my project, I used basic quilt batting because I had some conveniently on hand. However, if you don’t have any stuffing handy, plastic bags are a great way to stuff amigurumi projects.

Normally, I stuff items with plastic bags if I want them to make that fun crinkle sound. At the same time though, the bags would still work fabulous for this project; even if you don’t want it to crinkle, the fish lives inside a jar, out of reach. Since I use plastic bags to make plarn, I save the handles to stuff small projects.

I hope to design a few more fish in the coming weeks, so keep an eye on my blog and my YouTube channel for more fun free patterns! 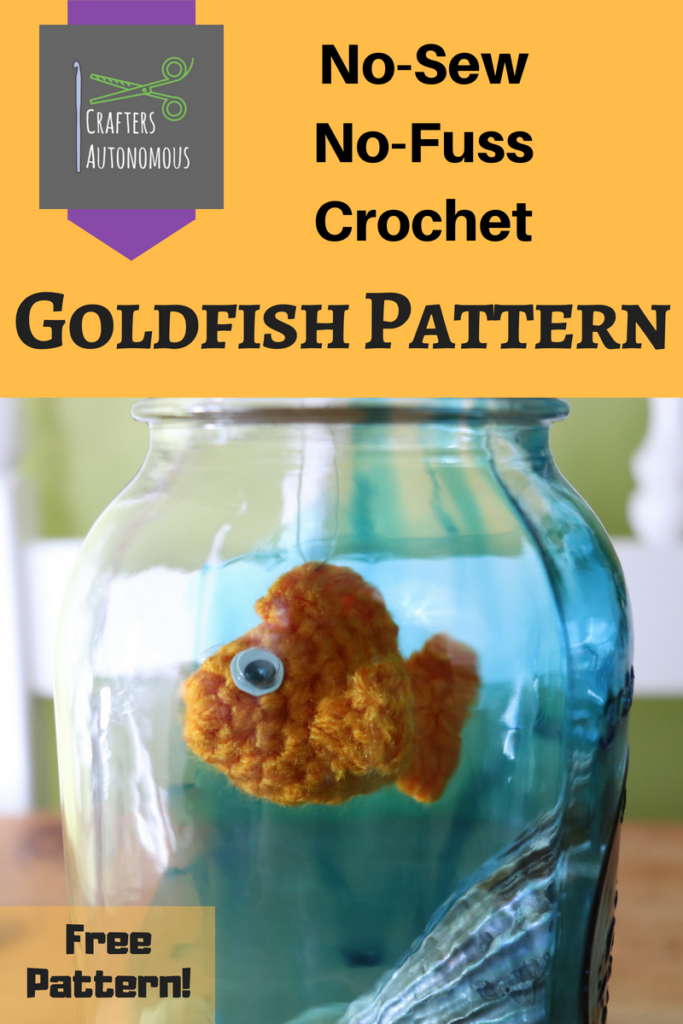 Let me know in the comments below how your no-fuss fish turned out!